1. What are the six JROTC objectives that help develop a cadet?

Ability to communicate effectively, both orally and in writing.

Appreciation of the importance of physical fitness support of the national objectives.

Appreciation of the role of the United States Army in support of the national objectives.

3. What is the mission of JROTC?

4. What is the key to success in JROTC?

The key to success in JROTC is TEAMWORK.

Three stripes up/three down and a diamond- First Sergeant

6. What is the Heimlich maneuver used for?

To clear a blocked airway.

7. What do the letters “CPR” stands for and what is it used for?

Cardiopulmonary Resuscitation and it is used to restore a heartbeat and restore breathing to a patient.

The assistance someone provides to an injured person until medical personnel arrive.

9. What is mouth-to-mouth resuscitation used for?

10. What are the four life-saving steps?

a. Check and clear airway and restore breathing.

b. Check for and stop bleeding.

c. Check and treat for shock.

d. Dress and bandage the wound.

11. What are the five basic colors found on a military map and what do they represent?


12. What instrument would you use to determine a magnetic azimuth in a field environment?

13. What instrument is used to determine grid azimuth on a map?

14. What are the five major terrain features?

15. How many north’s are found on a military map and what are they called?

16. How many inches in a normal step in marching?

17. Which foot can you give the command halt on?


18. What position are you allowed to speak while in formation?

The position of “Rest”.

19. All stationary commands are given from which position?

The position of “Attention”.

22. Who were the primary antagonists during World War I (Who did the U.S. and its allies fight)?

23. Who were the primary antagonists during World War II (Who did the U.S. and its allies fight)?

25. Who was the Commander of the revolutionary Army?

26. What war accounted for the most American casualties?

28. What country did the U.S. and its allies fight in the Gulf War?

Citizenship and the Constitution:

29. What are the first 10 Amendments to the U.S. Constitution know as?

The Bill of Rights.

30. Which amendment grants the “Freedom of Speech”?

31. What age is the U.S. Citizen first allowed to vote?

32. What are the two primary political parties?

The Republican Party and the Democratic Party

I will guard everything within the limits of my post and quit my post when properly relieved.

I will obey all my special orders and perform all my duties kin a military manner.

I will report all violations of my special orders, emergencies and anything not covered in my instructions to the commander of relief.

36. How should the JROTC uniform be worn?

37. What are the two major categories of rank for cadets and military personnel?

38. What title is given to the cadet leader in charge of the company?

39. Being a good follower is an important part of what concept?

40. What does the position of Honor indicate?

Those of a lower rank walk or sit to the left of those senior in rank.

41. How do you show respect to the National Anthem when outdoors in uniform?

Stand at the position of attention and render a hand salute to the U.S. flag.

42. What is meant by the flag being at half-staff?

43. Blood that is bright red in color and shooting out in spurts is an indication of what type of bleeding?

44. What are the three firing positions in air rifle marksmanship?

45. How many types of military flags are there and specific there sizes?

46. When is the Garrison flag flown?

49. What is the honor point of our flag?

50. What do the colors on the U.S. flag represent?

51. What do the stripes on the U.S. flag represent?

A map is a drawing, made to scale for the earth’s surface as seen from above.

55. What is the rule for reading a set of coordinates?

Read to the right and up.

Explains the symbols used on a map.

The bar scale on the map is used to convert map distance to ground distance.

59. What are the colors on the map used for?

To distinguish objects on the map.

60. Identify the direction used on a topographic map.

61. What is the declination diagram on a map used for?

A horizontal clockwise angle measured from a know reference point.

63. What is meant by the marginal information on a map?

The data placed around the outer edges of a military map.

64. What are the three ways to stop bleeding?

65. What are the three methods of opening the airway?

Leadership is the ability to influence and direct others to accomplish an assigned mission through purpose, motivation, and direction.

The junior in rank always salutes first. All salutes should be returned.

68. Where and when do we salute outdoors?

We salute outdoors within six to thirty steps; upon recognition; or when eye contact is made.

The person in charge of the detail salutes first.

Command is the authority a person in the military service exercises over subordinates by virtue of rank, assignment and position.

71. As a cadet officer or NCO what are you responsible for?

I am responsible for training, discipline, and the welfare of those individuals assigned to my control.

Discipline is the individual’s attitude that insures prompt obedience to orders.

A leader is any person in a position of responsibility who influences and directs people.

74. Where is the 5th Brigade ROTC Headquarters located?

75. What are the three characteristics of effective writing?

77. What are the two parts of an oral drill command?

Preparatory and Command of execution.

78. You may talk while you are in what drill position?

Drill is the process of moving an element from one point to another in unison and precision.

I am an Army Junior ROTC cadet. I will always conduct myself to bring credit to my family, country, school, and the Corps of Cadets. I am loyal and patriotic. I am the future of the United States of America. I do not lie, cheat or steal and will always be accountable for my actions and deeds. I will always practice good citizenship and patriotism. I will work hard to improve my mind and strengthen my body. I will seek the mantle of leadership and stand prepared to uphold the Constitution and the American way of life. May God grant me the strength to always live by this creed.

81. Name the Governor of Texas?

83. What agency is available to the Governor in case of disaster or civil disturbance?

84. What color socks are worn with the class A or B uniform.

85. What type of shirt is worn under the Army green coat?

86. The black necktie/neck tab is optional when wearing what type of uniform?

Class B uniform with short sleeves.

87. What color t-shirt is worn with the class A or B uniform?

88. What uniform is worn during ceremonies and social functions?

The Class A or B uniform.

89. What uniform is worn at summer camps and for participation on special teams?

90. What insignia do cadet officers wear on the garrison cap?

91. What insignia do enlisted cadets wear on the garrison cap?

92. What color t-shirt is worn with the ACU uniform?

93. How is the grade (or ROTC) insignia worn on the garrison cap?

On the left side of the cap one inch from the crease and centered vertically between the top braid and the bottom of the cap.

94. How is the JROTC shoulder sleeve insignia worn on the class A uniform?

On the left sleeve, ½ inch below the shoulder seam.

95. Where is the Honor Unit insignia worn?

96. How are ribbons positioned on the class A uniform?

Ribbons are centered on the left side 1/8 of an inch above the left pocket (centered above the horizontal line for female cadets).

97. How often must a uniform be worn by cadets?

At least once per week.

98. Can a male cadet wear an earring in uniform?

Small silver, gold or white spherical earrings not to exceed 1/4 inch in diameter.

100. How is the nameplate worn on your uniform?

Center the nameplate on the right pocket between the top of pocket and the top of the button for males. Even with the top button centered horizontally on the right side of the coat--in a comparable position on the shirt.

101. What regulation covers the wear of the uniform?

102. How are shoulder board ranks worn?

103. Are shoulder boards authorized for wear with the class B uniform?

I am an Army Junior ROTC cadet.
​I will always conduct myself to bring credit to my family, country, school, and the Corps of Cadets.
​I am loyal and patriotic.
​I am the future of the United States of America.
​I do not lie, cheat or steal and will always be accountable for my actions and deeds.
​I will always practice good citizenship and patriotism.
​I will work hard to improve my mind and strengthen my body.
​I will seek the mantle of leadership and stand prepared to uphold the Constitution and the American way of life.
​May God grant me the strength to always live by this creed. 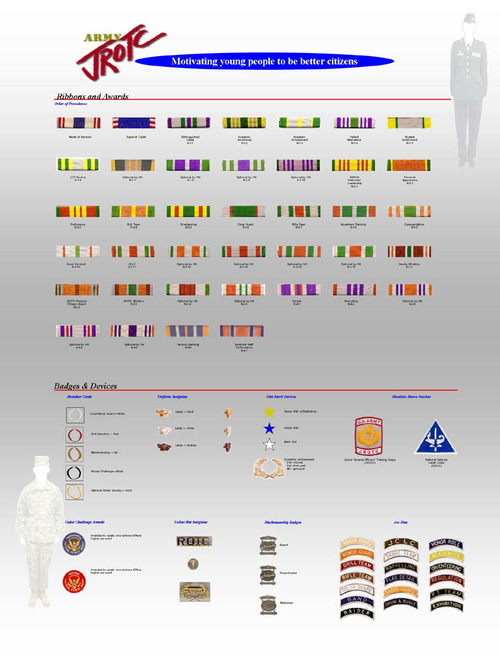 The JROTC Uniform is supposed to be worn by every cadet, once a week. There is a designated day for the uniform to be worn which for our program is Tuesday. Every Tuesday cadets must wear the uniform because it counts as a grade.
Cadets can receive ribbons and medals to put on their uniform when they participate in an event, competition or accomplish a requirement. They do not have to be related to the program. It looks good to have many ribbons and metals on a uniform because it shows the hard work a cadet has done.
General Knowledge